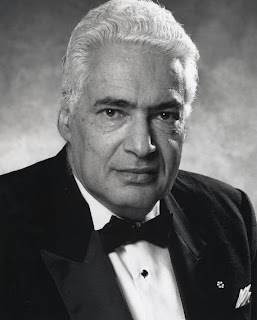 Today Dr. Irving Guttman is recognized worldwide as a leading authority on opera and the cultural arts. During his prolific operatic career, which spans four decades, he has been Artistic Director of a number of Canada’s major opera companies, including the Edmonton Opera, Manitoba Opera, Vancouver Opera, and Saskatchewan Opera, and Artistic Advisor to Calgary Opera. Dr. Guttman’s vocal acumen led him to engage Dame Joan Sutherland and Marilyn Horne for their first Canadian appearances in Norma, performances that have attained legendary status in the annals of Canada’s operatic history. With an ear for casting unmatched in recent memory, he has presented acclaimed Canadian artists such as Maureen Forrester, Judith Forst, Richard Margison, Heather Thomson, Victor Braun, Ermanno Mauro and Claude Corbeil in repertoire that was to be important in their international careers. As a Stage Director Dr. Guttman has been engaged by the leading opera companies of Canada, The United States, Central and South America, Taiwan, and Europe and his productions have starred such luminaries as Luciano Pavarotti, Beverly Sills, Placido Domingo, José Carreras and Renata Tebaldi, Monserratt Caballe, Regina Resnick, Victoria De Los Angeles.


Background
Irving (Allen) Guttman was born in Chatham, Ontario on October 27, 1928. Raised in Montreal, Irving discovered opera at a young age. As a child, he explored music and absorbed music and theatre in all its guises. As a teenager, he traveled with his friend to New York City, and overwhelmed with the experience he had at the Metropolitan Opera, committed himself to a life in the Opera.


With an innate passion for music and opera, Dr. Guttman attended the Strathcona Academy in Montreal from 1941-1946. Following this, he was accepted into Toronto’s Royal Conservatory of Music from 1947-52, where among his teachers were Oskar Morawetz, John Weinzweig and Eileen Weldon Parsons. He was an assistant to Herman Geiger-Torel 1949-54 at the Opera Festival (Canadian Opera Company) where he quickly elevated to the position of assistant stage director (1951-1952) to Walter Herbert at the New Orleans Opera. He made his directorial debut in May of 1953 in Cornwall, Ontario, with Menotti's The Consul, for which his cast included the young Maureen Forrester. That same year he directed a complete Faust, the first of some 65 operatic programs for CBC TV over the next six years, including many complete operas for 'L'Heure du concert'.


In 1956 he directed The Marriage of Figaro at the Montreal Festivals and in 1958 he made his US debut directing the Santa Fe Opera's world premiere of Carlisle Floyd's Wuthering Heights. After working as a guest director with the New Orleans, Baltimore Civic, Fort Worth, and Houston Grand operas in 1959.
In 1960, Guttman became founding Artistic Director (1960-74) of the Vancouver Opera, which put Vancouver on the map in the international opera community. For the Opera Guild of Montreal at Her Majesty's Theatre and at PDA he produced seven productions of six operas between 1963 and 1969. His Canadian Opera Company debut, La Traviata in 1964, led to seven productions of five operas for that company by 1975.
In 1965 Guttman became Artistic Director of the Edmonton Opera, a position he retained until 1991, when the Irving Guttman Young Artist Fund was established. That company's 1983 production of Lohengrin marked the first time a western Canadian company had presented a major Wagnerian work with surtitles (the English translation of the dialogue and lyrics projected on an overhead screen). He produced Faust for Expo 67 and has been a guest director with the San Francisco Spring and Philadelphia Lyric operas; in Barcelona, Spain (1969, 1971, 1973); and at the Montreal Festivals (La Serva Padrona and L'Heure espagnol, 1961).
In 1974 he was appointed head of the opera school at the Courtenay Youth Music Centre. He became Artistic Director of the Manitoba Opera Association in 1977, although his association with the company dates from its first production in 1973. In 1988 with Bernard Uzan and Guy Bélanger Guttman helped train young singers from the Atelier lyrique de l'Opéra de Montréal.
In 1991 Guttman became Artistic Director of Saskatchewan Opera, where he remained until 2001. He worked as artistic advisor to Calgary Opera from 1998-2001, and continues to provide mentorship to General Director and CEO, W.R. (Bob) McPhee.
After his retirement, he continued to work as a mentor, teacher, and guest lecturer around the country and throughout the world.
In honour of his life-long commitment to opera in Canada and across the globe, Dr. Guttman has been awarded the Order of Canada, The Centennial Medal of Canada, the Queen’s Jubilee Medal, the Alberta Award for Excellence, the Governor General’s Canada 125 Medal and holds and honorary Doctorate of Letters from the University of Winnipeg. Most recently, Dr. Guttman was appointed to the Order of British Columbia and received the Opera Builder Award at the Second Annual Opera Canada Awareds Dinner in recognition of his musical activities, he is a Founding Director of “Friends for Life”, a non-profit society begin in the early 1990s which has provided assistance to over 1,200 people in Vancouver’s West End who are living with Aids or cancer.
Posted by Irving at 5:47 PM No comments: